Yesterday, May 30, an important part of London’s influence in the European financial world quietly slipped away. The European Banking Authority (EBA) closed its Canary Wharf office. There was no press release, no news report, only a statement on its website giving its new address. On Monday, June 3, it will re-open in Paris, France. 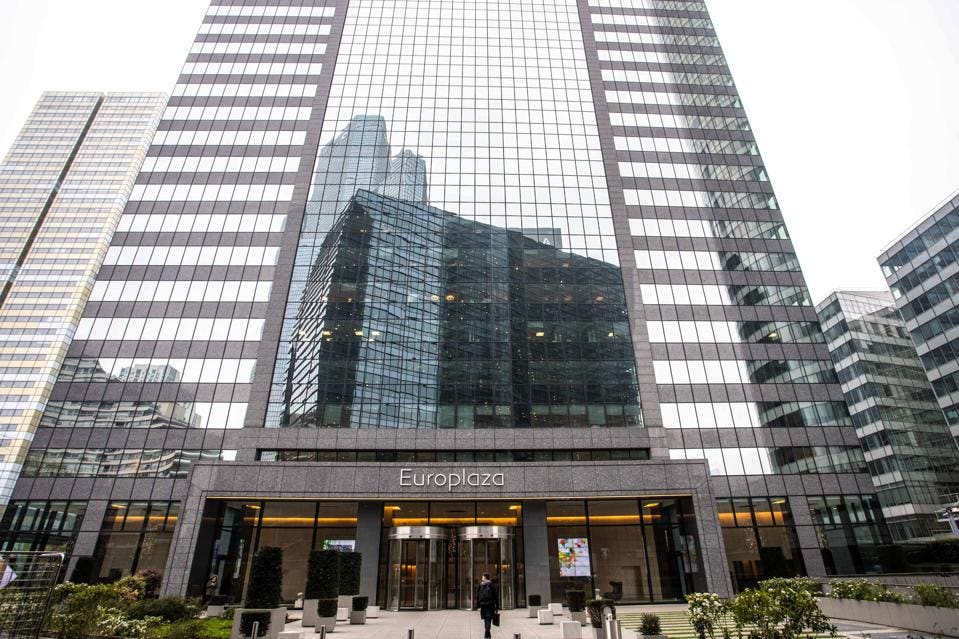 The Europlaza tower, where the London-based European Banking Authority (EBA) has just relocated, stands in the La Defense business district in Paris, France, on Wednesday April 10, 2019. The Paris region government has been a key driver of France’s Project Brexit. Photographer: Christophe Morin/Bloomberg

The EBA’s relocation is, of course, due to Brexit. In January 2017, the U.K.’s Prime Minister, Theresa May, announced that the U.K. would leave the EU’s Single Market (SM) and end the jurisdiction of the European Court of Justice (CJEU) in the U.K. From that moment onwards, the eventual departure of the EBA, along with its sister the European Medicines Agency (EMA), from the U.K. was certain.

The U.K. tried hard to hang on to the EBA. The Department for Exiting the EU (DexEU) claimed that its future was “a matter for negotiation.” But the EU negotiators saw it differently. The EBA is a Single Market institution operating under EU law. No way could it remain in a country that was leaving the Single Market and repudiating the CJEU’s jurisdiction.

Mrs. May’s fateful decision was the first of many blows to the City of London over the course of the Brexit negotiations. At the time, many people thought that British financial institutions would retain passporting rights to the European marketplace. So the EBA’s relocation didn’t seem that big a deal. But now, over two years on, there is no agreement that would preserve existing access to the EU for City institutions. Passporting rights are for the birds, and even regulatory equivalence is by no means certain.

To be sure, there is as yet no agreement on anything, and the U.K. hasn’t left the EU. But the U.K.’s stance on Brexit has hardened considerably. The European elections saw popular opinion polarize between leaving the EU with no deal and not leaving at all. Mrs. May, whose attempt to please everyone ended up pleasing no-one, has been hounded out of office. The front runners to succeed her would all rather leave the EU with no deal than agree to the Irish backstop – which is perverse, since Northern Irelanders themselves seem quite comfortable with the backstop.

The growing threat of no-deal Brexit has changed the game plan. According to the consultancy E&Y, financial institutions are no longer clinging on to their London-centric operations in the hope that nothing much will change. They are setting up subsidiaries in EU countries, staffing up existing offices, and relocating key operations. The EBA’s departure well in advance of Brexit should be seen in this context. European banking is shifting away from London. By the time Brexit happens, Paris, Luxembourg, Frankfurt and Dublin will already have become its home.

From the EU’s perspective, the relocation of the EBA to Paris is timely. In a recent interview with Thomson Reuters, Olli Rehn, a member of the ECB’s governing council and a potential candidate to replace Mario Draghi, observed that completing the European Banking Union would be a key challenge for the next decade. Regulatory measures introduced since the 2008 financial crisis, such as the Single Supervisory Mechanism and the Single Resolution Mechanism, apply to banks across the entire EU, including non-Euro countries such as the U.K. But the European Banking Union is a Eurozone initiative: although non-Euro countries in the EU would be able to join, common deposit insurance and last-resort fiscal backstop wouldn’t be available to them under current proposals. As the EBA is responsible for defining and enforcing the single rulebook governing European banking, and administers the European bank stress tests, it will inevitably have a central role in the European Banking Union. Moving it to a core Eurozone country would therefore make considerable sense even if the U.K. never left the EU. After all, the U.K. is the one country in the EU that cannot be forced to join the Euro.

But what does this mean for London? Financial pundits have repeatedly warned of serious problems for the U.K.’s financial services industry unless London has access to the EU’s single market. At present, this seems like a pipe dream: none of the proposals from the U.K.’s main political parties would give the financial industry what it wants. The hemorrhage of assets and staff from London seems set to continue.

British realpolitik is largely to blame for politicians’ lack of attention to financial services. London is by far the richest part of the U.K.; many of those who voted to Leave blame the vast GDP per capita gap between London and everywhere else on its close connection with the hated EU. Books such as Nicholas Shaxson’s “The Finance Curse” argue that the U.K.’s dominant financial services sector drains resources from other sectors and prevents the economy from diversifying. And people haven’t forgotten the financial crisis, the bank bailouts and the austerity imposed on them to pay for it all. There is a widespread view that cutting the bloated City down to size wouldn’t be a bad thing. Protecting banks from Brexit is thus a much harder sell than protecting car manufacturers and farmers. Unsurprisingly, politicians have concentrated on softening the impact of Brexit on goods exports, and largely ignored services.

And they may well be right to do so. Although onshore investment in the EU will now migrate to Dublin, Luxembourg and Paris, London will be the biggest offshore center in Europe – and offshore financial services can be highly lucrative. According to Reuters, investment in City real estate (including Canary Wharf) has ticked up in the last year. Clearly, someone thinks Brexit London is an investment opportunity.

Of course, the EU might not be too keen on having a massive offshore financial center on its doorstep. But that might encourage it to negotiate better access to the single market for London’s financial institutions. After all, it is a lot easier to regulate things you can see. This is one area where the EU may not have the upper hand in negotiations. Indeed, hardline Brexiters in the Tory party have more-or-less threatened to make the U.K. an offshore center if the EU doesn’t give them what they want – and the hardliners are now in the ascendant.

I am amazed to find myself writing this. But when you start to think through how the ever-innovative financial services industry might respond to hard or no-deal Brexit, a glimpse of a new international role for London starts to appear through the fog. I’m not sure even greater dominance of financial services in the U.K. economy, and even more wealth for London, is quite what most Leave voters had in mind. But I am beginning to think it might be what they get.